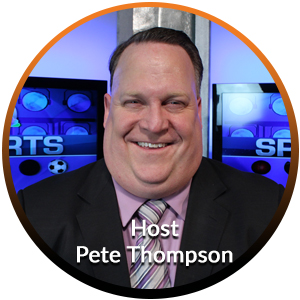 Pete Thompson has been the “sports guy” at the Jersey Shore since 2004. He spent a decade doing local TV sports for WMGM-TV, NBC 40 (Wildwood) until that station was sold at the end of 2014.

Prior to his work there, Pete spent a long time in Nebraska at three different TV stations. He broke into the business at KDUH-TV, ABC 4 in Scottsbluff, Nebraska before leaving for a quick stint at KLKN-TV, ABC 8 in Lincoln, Nebraska in 1998. Two months after arriving in Lincoln, Pete was on the move again heading 56 miles east to KPTM-TV, FOX 42 in Omaha.

Before his time in the Cornhusker State, Pete wrote for The Temple News, was Sports Director for WRTI-FM radio at Temple, and interned (twice!) at WPVI-TV 6 ABC with Action News. He credits the late Gary Papa with fueling his passion for becoming a local TV sports anchor.

Since 2019, Pete has written a weekly sports & entertainment column for SHORE LOCAL which can be found in the Wawa’s & Dunkin’ Donuts of Atlantic County. Pete also conributes to 97.3 ESPN on “The SportsBash” with Mike Gill, and he’s proud to be a VOICE of the annual ShopRite LPGA Tournament each year.

Pete is a native of Plymouth Meeting, PA and has a deep love for the Eagles, Flyers, Phillies and Sixers.

He is THRILLED to be able to support the ARC of Cape May County for their 60th anniversary and wants you all to know, bid GENEROUSLY…!!!