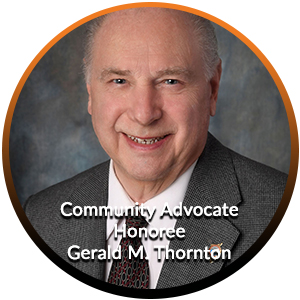 It is The Arc of Cape May County’s pleasure to honor Cape May County Commissioner Director Gerald M. Thornton. Mr. Thornton was first elected to County Government as a Freeholder in 1976 and served for 11 years until 1987, including three years as Director. Mr. Thornton was reelected to the Freeholder Board in 1995 and eventually became Freeholder Director in 2011. At that time, he assumed the responsibilities of overseeing the County Administration, Clerk of the Board, Emergency Management and the Treasurer’s Office, among others. Previously, he was the Freeholder overseeing Health and Human Services, where his departments created several programs that would be later adopted statewide. In 2019, Mr. Thornton was named to the New Jersey Association of Counties (NJAC) Hall of Fame in their inaugural class. NJAC also named Thornton their Freeholder of the Year in 2015. Mr. Thornton attended Kellogg Community College and the University of Maryland Overseas Extension. He is an 12-year veteran of the U.S. Air Force. He attended technical schools including Air Traffic Controller, Space Tracking and Telemetry, Automatic Radar, Management and Supervision and Non-Commissioned Officers Academy.